Writers in Their Own Words-GCC 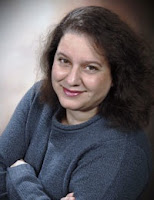 Today is the first real autumn-y feeling day we've had. I love it. There's Italian Beef in the crock pot, I'm wearing a light sweater, the jeans I haven't worn in 6 months still fit, and I'm ready to make a cup of tea and curl up with a good book. Lucky for me, Marilyn Brant has provided the perfect book: According to Jane.

Susan Wiggs, a #1 New York Times bestselling author, describes it a "A warm, witty and charmingly original story." And Cathy Lamb, author of Henry's Sisters, says it's "An engaging read for all who have been through the long, dark, dating wars, and still believe there's sunshine, and a Mr. Darcy, at the end of the tunnel."

It begins one day in sophomore English class, just as Ellie Barnett's teacher is assigning Jane Austen's Pride and Prejudice. From nowhere comes a quiet "tsk" of displeasure. The target: Sam Blaine, the cute bad boy who's teasing Ellie mercilessly, just as he has since kindergarten. Entirely unbidden, as Jane might say, the author's ghost has taken up residence in Ellie's mind, and seems determined to stay there.

Jane's wise and witty advice guides Ellie through the hell of adolescence and beyond, serving as the voice she trusts, usually far more than her own. Years and boyfriends come and go--sometimes a little too quickly, sometimes not nearly fast enough. But Jane's counsel is constant, and on the subject of Sam, quite insistent. Stay away, Jane demands. He is your Mr. Wickham.

Still, everyone has something to learn about love--perhaps even Jane herself. And lately, the voice in Ellie's head is being drowned out by another, urging her to look beyond everything she thought she knew and seek out her very own, very unexpected, happy ending. . .

1.) How did you come up with the idea for this book? Are you more driven by plot or by character?
I’m definitely more driven by character, but I think a good set of characters leads to situations that can be shaped into an interesting plot. For According to Jane, I started with a “What If?” premise: What if a young woman had Jane Austen’s ghost giving her dating advice? How would Jane instruct her? Would she listen? What might go awry? And what if Jane were wrong about someone? Would the young woman have the courage to follow her heart against the voice of wisdom?

2.) Who's your favorite character in this book and why?
Ellie, my heroine. She and I share a certain introspection and we each had a tendency toward perfectionism in school, plus, we were both children of ‘80s pop culture. I gave her those sides of me and love her like a favorite cousin. However, we’re not one and the same. Most of her painful relationship problems were (thankfully) extrapolated from things I observed or they were exaggerated from some real events and grafted to modernized versions of scenes I found fascinating in Austen’s novels. I like to think she handled those challenges fairly well, at least given how difficult it is to grow up. Certainly better than I would have.

3.) What's your writing process/writing environment like?
I write in my home office--a messy place, cluttered with stacks of paper and towers of books, but also a very nice window overlooking our backyard. Sometimes I’ll write at a local coffee shop (either with my laptop or, most often, just by hand on notebook paper), and that has the advantage of endless cups of coffee and occasional snacks. As for my process, I’m a very slow writer. It’s rare that I can draft more than a page or two in an hour. I obsessively reread and wordsmith before moving on to the next scene, which in no way means that I don’t also revise again (multiple times) at the end of a manuscript. It takes me about 9-10 months to completely write a women’s fiction book from start to finish.

4.) What's your favorite part of writing?
Getting to do something creative every single day. Truly, that’s been such a gift. Even when the plotting of a scene is giving me fits or the synopsis doesn’t seem to make sense at all…I love knowing that I have a place to play with these characters and storylines. My hope is that by writing about women’s dreams and experiences as honestly as possible, I might get closer to helping readers recognize truths about their own lives. It was this sense of “recognition” that my favorite novelists gave to me.

5.) What's the best piece of advice you've ever gotten about writing?
I’ve gotten a few good ones, applicable to life as well as writing, I think:
“Begin as you intend to go on.”
“It’s better to be than to seem to be.”
“Always over-deliver and under-promise.”

Marilyn lives in the northern Chicago suburbs with her family, but she also hangs out online at her blog "Brant Flakes." When she isn't rereading Jane's books or enjoying the latest releases by her writer friends, she's working on her next novel, eating chocolate indiscriminately and hiding from the laundry.
Posted by Judy Merrill Larsen at 10:47 AM

Judy, thanks for hosting me! And I happen to be a big fan of autumn, Italian beef and jeans that still fit :). Hope you have a marvelous day!!

It was great having you here!

Wow those are great things to be a fan of. Congratulations on your release. I am so excited for mine to arrive. And Season 1 of Castle on DVD is coming as well. Talk about a DEEEVINE present. For me, all me, mine, mine mine!!!

Thanks, Tina!!!
And of course you're a fellow Castle fan! We need to talk and bond even further over the wonderful Nathan Fillion...sigh. :)

Marilyn I think the "F" word runs in cycles throughout one's lifetime. I have past through my forties which I swore to my children I would NEVER acknowledge. I told them after 39 I'd start a count down then at 45 I acknowledged it and 50 just snuck by me. But I stayed true to myself with a closet 95% jean material. My music making a come back as "remixes". And three children from three decades that swear I don't think, dress or act my age!
Susan L

Click on cover to buy the book or to add to your reading networks!

Good Blogs and Sites to visit

Random Books in my Library