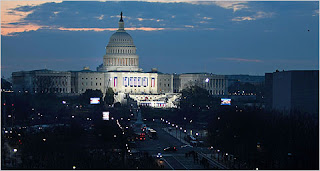 Inauguration morning began for me in the soft darkness of dawn when my nephew dropped 6 of us off on the Virginia side of the Potomac. Our breath puffing out in clouds, our muffled footsteps the only noise, we walked on a pathway between the Iwo Jima Memorial and Arlington National Cemetery. It seemed fitting. The headstones of the young men, most no older than our three sons, served as a reminder of the price that has been paid throughout the years so that we could be doing exactly what we were doing. We were about to witness and celebrate the exchange of power -- an exchange that had come about peacefully. An exchange that we were all responsible for.

My eyes were wet from more than just the cold.

We crossed Memorial Bridge, the Lincoln Memorial in front of us, the sun rising behind it. The enormity of the day, of the change that had come, pulled us forward.

By 7:30, my husband and I were in place on the Mall, midway between the Washington Memorial and the Capitol. 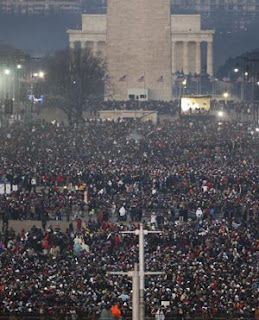 I'd wondered how we'd while away the time until the ceremony began four hours later, but I had no need to worry. On the Jumbotron in front of us, the "We Are One" HBO concert from Sunday afternoon was being shown. So we danced ("Shout" with Garth Brooks) and sang (with Stevie and Usher and Shakira) and cried (Springsteen's "The Rising" with a gospel choir). The spirit of celebration and change and hope filled the crowd.

And then it all began. 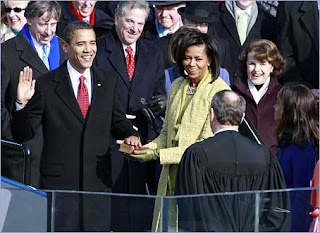 And I'd thought I'd know how I'd feel, worried that I might be underwhelmed. I mean, what could compare to election night and his words in Grant Park? But this was so much bigger. I was witnessing history, a specific moment when everything changed and the world watched.

His words rang out and I felt myself relax. I trust him and his slim shoulders and his huge brain to carry the weight of the United States. I know the road ahead will be long and rough--but I trust him to lead the way.

He's already banned torture. With one flick of his pen, one scrawl of his signature.

And I was there. Along with several million other folks who I will never see again. But for that morning, we were family, united in hope and pride and optimism.

I'm still feeling the warmth.
Posted by Judy Merrill Larsen at 8:42 AM

Labels: Barack Obama, news, politics, road trips, springsteen, the inauguration, this matters, who am I

Beautiful post, Judy. And, yes, such a proud moment. How amazing for you to have been there.

Judy - thanks so much for sharing this - you made me feel as if I was there with you. How wonderful for you and your family to have this memory!

Lovely. Anybody ever tell you that you should be a writer? :)

I trust him too, and I'm so thrilled to feel like I can trust my government for the 1st time in years!

Really fabulous, Judy. I'm so thrilled for you (and envious!).

You're the first person I know who was actually there to write about it, and who could say it better than you. I know there's more to say and I know emotion overwhelms you when you think back on the day. Thanks so much for sharing it with us. It's thrilling!!! Aren't we blessed to be Americans.

Wow. Lovely post. My husband and son were there as well--such a momentous occasion, despite the cold, despite the hardship to get there, it was well worth it. They came home exhausted but fulfilled.

And not one arrest--did you know that? Everyone there being harmonious and filled with the joy.

It was amazing and thrilling and everything all of you have said. I'm glad I could share my experience with you all.

It is great to be an American!

Great blog, honey. Loved that you began at Arlington. That would have put a lump in my throat for the rest of the day all by itself.

What a lovely summation of the day. Just reading it made my eyes well up again! It's so wonderful to be so hopeful again, isn't it? Thanks for sharing your post with me.

Ooooh, CHILLS! I thought of you, Judy, hope you felt me there, loving every wonderful moment of this.

Oh Judes- How wonderful! I would have loved to see it all- I'm glad you shared. Seeing it through your eyes is almost as nice as being there. I sat at home and laughed and cried and prayed, and felt like I knew him. I almost wonder if he'd know me if he saw me! What a huge and wonderful weight is on those- as you so perfectly put it- slim shoulders. I'm glad you were there!!

Judy,
I thought I'd finally stopped crying happy tears, but you got me again. This was so beautifully written. I'm very happy that you had this experience. But even though I was at home alone watching it on TV, I kind of feel like I was there, too. What a day.

Nancy, Eve, Kristy, Barb, and Wendi--Isn't it cool how we all felt part of it--whether we were there or not. We did this. Yes we can. Yes we did.

Thanks for taking me along on your trip into history. Debra Shrout

Lovely. My wife had an appointment and missed the inauguration so we watched it again on the DVR--it was still impactful.

Very nice post. I love that you started out at Arlington - that would have gotten me verklempt, for sure. I know the feeling you describe about being there - we went to Clinton's inauguration in 1993, which wasn't the same as Obama's, but definitely a momentous occasion.

Thank you so much for sharing! What a day, what a week, what a year this has been. Every time I turn on the TV, there's been another momentous event. I've subscribed to the White House blog (do it if you haven't already -- it's fantastic), and I've never felt so included. The torture ban and closure of Guantanamo were a huge relief for me, and just when I thought that would be the most significant news I'd hear for a while, he lifted the ban on stem cell research. The good news keeps coming!

I want to thank you again for your blurb - *smiling* - Thank you!

I still get tears in my eyes and a lump in my throat thinking of that day and thinking of the near future.
I posted a poem on Inauguration day, if you're still in the mood for more. :)

I know I told you, but this was a beautiful post, Judy! I was at Grant Park, you were at the Inauguration - between the two of us, we have this new era of Hope and Change covered!

steve on the slow train said...

Excellent post, Judy. (Just linked over from Eudaemonia.) My wife, daughter, and son-in-law were there. (Check my blog for "Kathleen's Big Adventure.) But isn't it wonderful to have a president who can inspire us?

Click on cover to buy the book or to add to your reading networks!

Good Blogs and Sites to visit

Random Books in my Library